"We'll teach you to drink deep ere you depart."

Let’s take a break from our usual education-based Blog and pause for an adult beverage or two. After all, if you’ve been grading essays and teaching Shakespeare for a while, you may need a drink.

One of my favorite libations is Rogue Shakespeare Oatmeal Stout made in Newport, Oregon. The Rogue Brewery website describes this brew as “ebony in color with a rich creamy head, earthy flavor and a mellow, chocolate finish.” I’m not sure about that chocolate, but it does taste good. It’s available here in New York and probably everywhere else.

But if you’re ever in Oregon, be sure to stop in to one of the Rogue Brew Pubs. There are several of them and there’s even one in the Portland Airport.

The actor, Kyle MacLachlan (Twin Peaks, Blue Velvet, Sex and the City, and Desperate Housewives) has

partnered with Eric Dunham of Dunham Cellars to produce a pricey ($65 a bottle) Cabernet Sauvignon, which they say has a taste of allspice, clove, hints of anise and chocolate-covered cherries. But the Pursued by Bear website is brilliant as it zooms in on the Globe Theatre and shows us that famous bear from The Winter’s Tale, complete with roaring. It’s worth a visit.

They even have a Baby Bear Syrah which they say  has “debaucherously nuanced flavors” of “baking spices, cumin and a lavender nose.” At $65 a bottle, it still is out of my price range.

A few years ago, a former student of mine (now a teacher) came to a workshop I was giving and presented me with a bottle of Shakespeare Vodka by V’Guara. It’s been a while since I finished the bottle, so I can’t report on the quality; but the bottle is beautiful, and I keep refilling it with bottles of Absolut or Smirnof’f.

It’s a great conversation piece as it has a see-through label with an image of Shakespeare on the back.  If you’re ever in my neighborhood, stop in and I’ll pour you a drink. 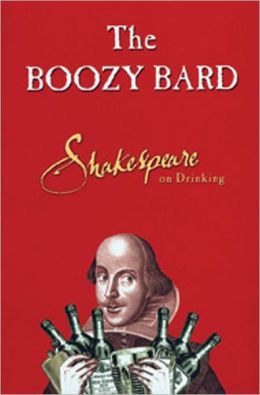 Here are a few famous quotes:

“Do you think because you are virtuous, that there shall be no more cakes and ale?” Twelfth Night 2.3

“Good wine is a good familiar creature, if it be well used.” Othello 2.3

And finally, if you’d like to enjoy an adult libation and see a fine Shakespeare play, head to Atlanta and stop in to the New American Shakespeare Tavern®.

The New American Shakespeare Tavern® is unlike other theaters. It is a place out of time; a place of live music, hand-crafted period costumes, outrageous sword fights with the entire experience centered on the passion and poetry of the spoken word. With an authentic British Pub Menu and a broad selection of Irish ales and premium brews, the Shakespeare Tavern® is a place to eat, drink, and nourish the soul.

Have a holly jolly Christmas! From our collection,