Why are there so many “modern” versions of Shakespeare’s plays?

There are plenty of great books that don’t need translated versions. We don’t look for easier versions of Dickens, Hawthorne, Melville, or Fitzgerald (or at least, I hope we don’t.) But re-doing Shakespeare seems to be a favorite sport of publishers.

In a way, we can trace it back to Nahum Tate in the 1680’s and Thomas Bowdler in 1818, but they had totally different agendas than today’s creators. Tate wanted happy endings and Bowdler wanted to clean up the naughty bits.[I’ll talk about them in my next post.]

We at the Folger have a standard answer when someone asks us what we think of “modern” versions of Shakespeare’s texts:

“IF YOU’RE NOT GOING TO USE SHAKESPEARE’S WORDS, DON’T DO SHAKESPEARE.”

Why dumb down all those beautiful words and images for the sake of making it easier? We’ve found that if you’re teaching Shakespeare in an active, performance-based approach, the language becomes less of on obstacle.

It’s the words that matter. Here’s an example of a passage from R&J which I’ve written with an interlinear version with the No Fear version: 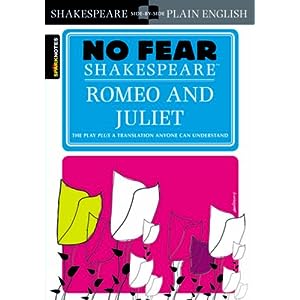 Shakespeare: Oh, she doth teach the torches to burn bright!

No Fear: Oh, she shows the torches how to burn bright!

Shakespeare: It seems she hangs upon the cheek of night

No Fear: She stands out against the darkness

Shakespeare: Like a rich jewel in an Ethiope’s ear,

No Fear: like a jeweled earring hanging against the cheek of an African.

Shakespeare: Beauty too rich for use, for earth too dear.

No Fear: Her beauty is too good for this world; she’s too beautiful to die and be buried.

Shakespeare:  So shows a snowy dove trooping with crows As yonder lady o’er her fellows shows.

No Fear: She outshines the other women like a white dove in the middle of a flock of crows.

Shakespeare: The measure done, I’ll watch her place of stand,

No Fear: When this dance is over, I’ll see where she stands

Shakespeare: And, touching hers, make blessèd my rude hand.

No Fear: and then I’ll touch her hand with my rough and ugly one.

Shakespeare: Did my heart love till now?

No Fear: Did my heart ever love anyone before this moment?

No Fear: My eyes were liars, then

Shakespeare: For I ne’er saw true beauty till this night.

No Fear: because I never saw true beauty before tonight.

See the difference? Post your comments below as to the effect of the translation.

I almost hesitate to mention more of these, but they are worth discussing here. The following are for the print empaired student:

But back to print. Here are the candidates:

I won’t get into the manga and graphic versions of the plays, most of which retain the original language and are quite good.

One of my students recently said to me, “You have some strong opinions.” Yes, I do, but if you feel that there’s room for these translations in your class, I encourage you to post your comments below.

Mike LoMonico
This error message is only visible to WordPress admins